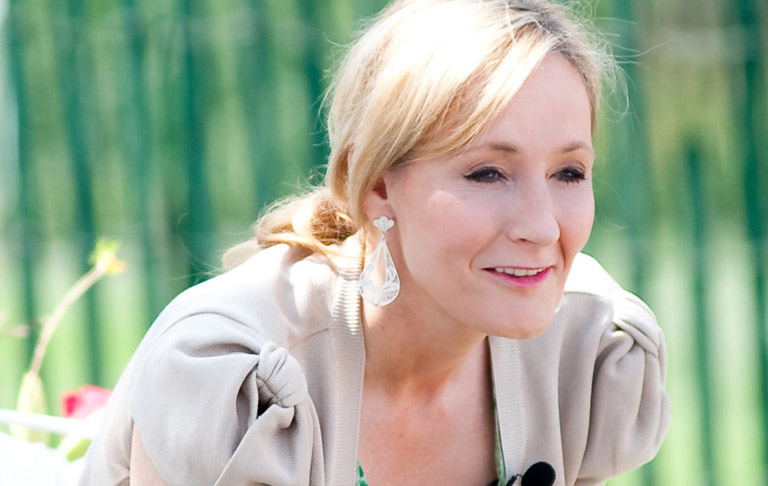 J.K. Rowling is the creator of one of the biggest and best selling book and film franchises in history. Her own epic Harry Potter journey began on a train from Manchester to London when the idea came to her fully formed. She began writing the moment she got home.

The Exeter university graduate moved to Edinburgh from Portugal with her daughter, following a failed marriage, to be closer to her sister. While in Edinburgh, Rowling was on welfare for a period of time, struggling to provide for herself and her daughter, Jessica. She described her financial situation to be ‘as poor as it is possible to be in modern Britain, without being homeless’. During this time in her life, Rowling was also diagnosed with clinical depression. She contemplated suicide at one point, and her despair was only added to by her husband’s arrival in Edinburgh in search of his daughter and Joanne. She obtained a restraining order, which resulted in him returning to Portugal. She filed for divorce in 1994. The following year, Rowling completed her first draft of Harry Potter and the Philosopher’s stone. Her book was sent out to twelve different publishing companies and was rejected by all of them. It was another year before Bloomsbury, a publishing house in London, finally agreed to publish the book, giving Rowling a £1500 advance for it.

Rowling, like many talented authors, used the experiences in her life to inspire her work, and there is evidence of this in the Harry Potter novels. Her mother’s death during the early stages of the book’s development resulted in Rowling having a larger focus on the loss Harry felt with his parent’s death in the story. Because she knew how that feeling of loss felt, she could describe it in more detail in the text. Her clinical depression also led to the creation of the ‘Dementor’ characters from the third book. The soul-sucking creatures were inspired by her time with the illness, the effect they had on their victims was similar to what Rowling felt when depressed.

After finally getting a deal to have her first book published, her situation still did not seem promising. Cunningham, the editor who green lighted her book, advised her to get a day job, as it wasn’t likely that she would make much money in children’s books. However, she soon received an £8000 grant from the Scottish Arts Council. Her first novel also went on to win the Nestlé Smarties Book Prize and Children’s book of the year. Rights to publish the book in the US were sold to Scholastic Inc. For £$105,000, money Rowling used to move out of her flat and into a house. Her sequels went on to win numerous awards and sell a huge amount of numbers, with the final four books in the series all consecutively breaking sales records. The final one, Harry Potter and the Deathly Hallows, sold 11 million copies in the first 24 hours. The Harry Potter brand is now worth an estimated 15 billion dollars. The series was also credited with sparking an interest in reading for a generation of young people at a time when interest in books was dying out. J.K. Rowling’s personal fortune is estimated at 560 million dollars, making her the 12th richest woman in the United Kingdom. Time magazine named her their runner up to the Person of the Year award in 2007, and in 2010 she was named the ‘Most Influential Woman in Britain’ by magazine editors. Not bad for someone who started out as a single mother on benfits.

In 2000, Rowling created the Volant Charitable Trust, which combats poverty and social inequality. The once single mother is also the president of the charity Gingerbread which provides advice and support for single parent families. As well as this, two booklets the author wrote for Comic relief raised over fifteen million pounds for the anti-poverty fundraiser. J.K. Rowling turned her life around. From struggling to provide for her daughter to earning fortune writing, helping children regain an interest in reading and getting involved in many charities, including one which helps parents in the same position she’d found herself in. Rowling’s life story is inspirational to say the least, showing that, with hard work and creativity, anyone can achieve success.
UT is a neg free zone! Constructive criticism and useful feedback is welcome, but bullying and abuse of any kind won’t be tolerated. This is a happy place so keep your posts positive! :-)