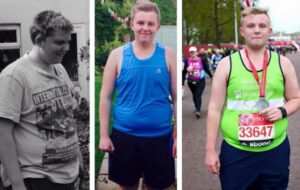 You’re 16, tired and unfit. Do you reach for another doughnut or do you do what Sam Beard did and get off your arse and go for a run?

Back in 2013, Sam Beard chose to go for a run, and he hasn’t looked back. In fact, he’s raised thousands of pounds for charity, lost more than 40 pounds in weight and won himself a place in the record books. As the saying goes, ‘You don’t have to be great to start, but you’ve got to start, to be great’.

Straight after GCSEs, Sam was bored. Every day was the same – watching TV, playing video games, comfort eating – and before long he’d ballooned to nearly 20 stone. One day the boredom got so much he decided to go for a run. It wasn’t a pretty sight and some kids laughed and jeered, but he didn’t care. He’d discovered running was fun – and it was about to change his life!

Sam says, “Running hadn’t been something I’d ever thought about really, but one evening I was so bored I just put on my trainers and went out. I didn’t run very far or very fast, but it got me started. And when I saw those kids laughing at me I could’ve easily stopped, but I wanted to prove them wrong.”

Over the next few months, Sam challenged himself to run further until one day he ran ten miles and realised he’d nearly done a half marathon!

That spurred him on and in October 2013, just eight months after he first pulled on a pair of running shoes, he completed the Stroud Half Marathon in a very respectable 2:27:11. “Afterwards I felt immense pride,” he says. “I never thought I could do a half marathon but after that first one I was hungry to do more.”

By now, Sam had really got the running bug and he competed in many more races, including the Great North Run and Manchester Marathon, raising hundreds of pounds for charities including Winston’s Wish and The Meningitis Trust. He’d also lost tons of weight too, and his confidence was through the roof. But this was only the beginning of Sam’s running journey. He had a master plan.

Sam’s dream was to run seven marathons in seven days. That’s more than 180 miles in a week! During training, Sam had his share of injuries and there were times when it all seemed too much. But his determination paid off and in April 2015 he ran six marathon-length routes in Gloucestershire and finished his challenge by collecting a medal at the London Marathon. Along the way, he also raised more than £4,000 for the children’s charity Barnardo’s. But more than that, he was the youngest person ever to complete the challenge.

Despite suffering more injuries, Sam is back running again and this year ran a self-organised 12-hour challenge in preparation for the Cotswolds 24-hour race, where he’ll be running day and night, non-stop! This time he’s raising money for Stroud-based AllSorts, a disabled children’s charity he’s an ambassador for.

So what inspired Sam to keep going even when it felt like everything was against him? “It’s very difficult to keep motivated when you’re injured but you’ve got to focus on what you can do – things like strength training and mental training – so that when you do come back from injury you are even better than you were before,” he says.

“If anyone else is feeling like life’s passing them by, my advice is to just try something and go for it – and don’t be afraid of anyone who wants to stand in your way. Life’s there for the living.”

Sam’s nearly 20 now and apart from running, he’s working as a cake baker and loving his adventures. But it could all have been very different if it wasn’t for that first time he went for a run. So next time you’re bored, remember Sam’s story. What could you do today to change your life?

YouTube: https://www.youtube.com/channel/UCjH_tWhB5weNy_ZlkQrPbgQ
UT is a neg free zone! Constructive criticism and useful feedback is welcome, but bullying and abuse of any kind won’t be tolerated. This is a happy place so keep your posts positive! :-)